“The last human to touch this before us was planning to cook dinner over an open fire using a critter killed with this,” I told my kids.

With eyes aglow, they fondled the stone point like it was pure gold. We’d just found evidence of ancient hunters in our front yard, but there was a time when finding an arrowhead was a matter of sheer luck for me. Every couple of years a random gaze toward the dirt would produce a point. But now I have a strategy when afield.

Here are six places where you can find ancient tools. But before you start looking for projectile points, it’s important to understand legalities. Most public lands don’t allow the removal of artifacts, so brush up on federal and state regulations before starting your search.

Prominent Creeks
The first humans arrived in North America at least 15,000 years ago and dispersed across the continent. Without methods to store and transport water, they needed daily access to fresh water. So, they camped, traveled, and hunted near water systems. In these drainages they also made, left, lost, and broke stone tools. These points washed into creeks or rivers and become part of their gravel system over the centuries.

Walk creeks and look for unnatural colored rocks and shapes. In some cases, natives used non-local stone like obsidian, which makes the points stand out. Flowing water sifts gravel into different sizes along gravel bars. Look for points in gravel bars where rocks are similar in size to the points you’re hoping to find. Keep your eye on the outside bend (or cut bank side) of the creek where erosion exposes bare dirt.

High Spots Near Water
In my front yard there is a small rise, probably not more than 18 inches higher than the surrounding ground. On two sides of the rise are small creeks. I’ve found more stone points and flint flakes there than any other place on my property. It’s likely this was a historical campsite.

I’ve heard it said, “good land now was good land then.” When traveling water systems, look for high points that would have given campers good visibility, a flat surface, and protection from high water. If you’d like to camp there, then our ancestors probably did, too. These high spots could be large or small, but the principles are the same.

Springs
Fresh drinking water located away from larger water systems also makes for quality camping. These early peoples tent-camped or slept under the stars 365 days a year and understood the advantages that made life easier. Here’s a tip: If you find flint flakes (chips) in an area, stone points are close. These hunters were constantly knapping out stone points or sharpening the ones they already had.

Percussion knapping leaves a lot of chips. Where you find them, you’re bound to find full points. Ask yourself this: where would make for quality camping and living near springs. Your gut might be right—look there. 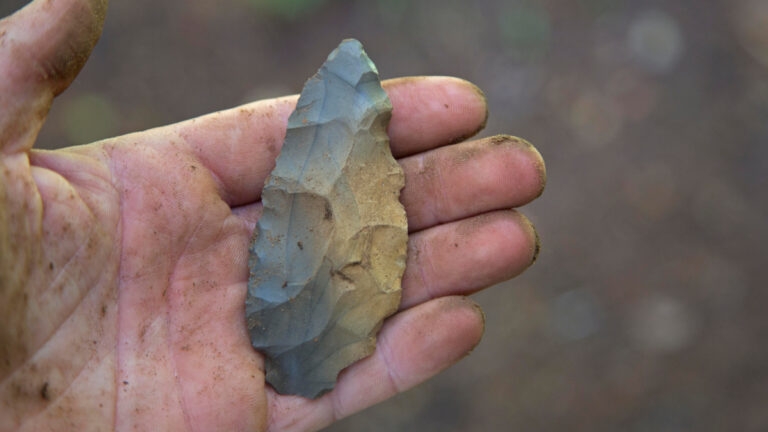 Exposed Dirt
More points have probably been in found in plowed fields than any other place. Modern agriculture is often located in ideal locations for ancient camping and hunting. Exposed dirt is key to finding points, and a fresh rain can make points easy to spot.

Often they’re perched above the surface of the ground on a soil platform and appear to almost glow. It’s an incredible sight! Any place with exposed, bare dirt has a possibility of revealing points. I started finding heads on my land when our mules made trails and dirt wallows. Look in cattle trails, places where machinery has skinned the ground, dirt roads, eroded bluffs and banks, and even buck scrapes.

Rock Overhangs
Natives were smart campers and took advantage of terrain features for shelter, including rock ledges and caves. These places hold stone points. If a couple of people could huddle underneath it to stay dry, they likely did, and they probably left something there.

Many serious artifact hunters dig out rock overhangs (on private land, where legal) and even run the dirt through a screen. Organic matter builds up over centuries under these features and points can be many feet below the surface. Look for ledges that have flint flakes nearby or smoke-stained ceilings.

Flea Markets
Ancient tools made by prehistoric hunters are cool no matter how you come across them. Keep your eyes peeled for stone points at flea markets, garage sales, or from individuals who may not value them. I never thought I would enjoy owning a purchased point, but I’m beginning to rethink that position.

Much of the value of my personal collection is attributed to the fact that I found them. However, when you recognize the art and skill of these ancient flint knappers, you can still appreciate a point that someone else found.

But, hopefully the first five spots produce so you don’t need to rely on second-hand arrowheads. Keep your eyes on the ground when afield and you just might find something incredible.